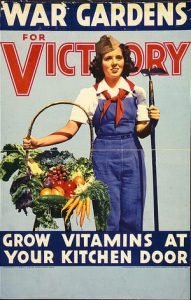 During World War I, Americans were encouraged to grow victory gardens, or war gardens, with slogans declaring, “Food will win the war” and “Sowing the seeds of victory.”

The idea resurfaced during World War II as the Office of Civil Defense encouraged gardens to counter a critical food shortage in America. Men and women who had worked in agriculture were now serving in the armed forces. Food was so scarce that it was rationed and could be purchased only with stamps. Commercially produced food was being sent overseas to the fighting forces.

Approximately 6 million Americans picked up their rakes, shovels and hoes and “did their bit” for the war effort.

The gardens, whether at home, in public lots, city parks or government land, guaranteed America’s self-sufficiency in the food supply and gave farmers a sense of civic pride — a feeling they were helping to win the war in some small way.

Today, the victory garden concept has been resurrected — this time because of food anxiety brought on by the novel coronavirus.

Fifty thousand packages of seeds were distributed to Hoosiers to plant in their backyards during World War II. The emphasis was on vegetables that served as meat substitutes, such as peas, beans and eggplant.

The victory gardens were not just for the summer but for a full year’s food supply. “Even if this war comes to an unexpected end, we must plan to continue our victory gardens for as many years as it is necessary for us to feed the peoples of other nations who have suffered from this war,” advised Harry Peterson, victory garden chairman of the Office of Civil Defense.

That’s why vegetables that were easily canned, such as corn, tomatoes, peas and beans were encouraged. Food that could be stored in cellars, such as potatoes, pumpkins and squash were also popular, as they would not be available in markets

Gardeners were also encouraged to plant flowers to boost wartime morale. Sunflowers attract birds, and birds are the best enemies of beetles and other crop-destroying pests.

School classes planted victory gardens across Indianapolis. Arsenal Tech biology students planted a garden that started as a practical demonstration area but turned into a bounty of vegetables.

Plots were available across Marion County for those who lived in apartments or had no yard space.

WIBC began the “Garden School of the Air,” a series of broadcasts in 1945 by the Purdue Extension. The Indianapolis Star and Indianapolis News had tips for planting, care and harvest of victory gardens.

You may have noticed a parallel between the World War victory gardens and our present-day situation with the coronavirus. Labor shortages, closed business, empty shelves, limitations on the purchase of beef, chicken and pork — though we’ve not come to the point of ration stamps.

Victory gardens are making a comeback.

In a recent interview with Reuters news service, George Ball, chairman of Burpee Seeds, reported the company sold more seeds in March than any time in the company’s 144-year history.

Diane Carter, owner of Cox’s Plant Farm in Clayton, has certainly noticed an uptick in sales of seeds and plants during the coronavirus. She said sales for tomatoes, potatoes, peppers and seeds have increased, though she noted “some credit goes to the weather,” referring to the recent spring frost that caused many to replant their tomatoes.

For those new to gardening, Carter recommends people start small with raised beds or pots. Tomatoes are a nice easy vegetable to start with, she said.

Today, community gardens are growing in popularity. But one doesn’t need a plot to have a harvest.

Strawberry pots, those distinctive clay pots with large staggered holes, can be used for a variety of herbs — or strawberries, of course. Wooden, raised beds on apartment balconies can be used to grow almost any type of small crop.

Victory gardens gave local gardeners a sense of patriotism knowing they were helping in the war effort by reducing pressure on the public food supplies. Perhaps this new war we’re all fighting will spur a new sense of community spirit.